Recent changes to the immigration process with some asylum seekers released into the community under ‘bridging visas’ whilst their claims are being processed are welcome, but sadly do not spell the end of mandatory detention. A new detention centre continues to be built at Wickham point near Darwin. The rate of release on bridging visas will be torturously slow, 100 per month would mean 1200 a year, but there are over 2000 people who have been in detention over a year.

Who will be eligible for release remains unclear. This is the kind of uncertainty, that is already one of the main causes of tension within detention centres. The uncertainty is also mental torture for detaineees. The process must be made immediately transparent.

The Refugee Action Collective (Victoria) will be part of a national rally in Sydney on Sunday outside the ALP National Conference demanding an end to mandatory detention and offshore processing as the conference debates the Labor Party platform on offshore processing, particularly the future of the currently suspended ‘Malaysian solution.’ If Chris Bowen and Julia Gillard were serious about humane refugee policy, they would change the law to scrap offshore processing, rather than try to put it in the ALP platform.

“The recent changes don’t go far enough. There are still thousands in detention, which causes incidents of self-harm, and attempted suicides. Three stateless Faili Kurd Asylum seekers have stiched their lips and are on hunger strike in Darwin. The bridging visas have not helped them. There are 600 stateless asylum seekers who should be released immediately. The minister has the power to do so.

“Now the Malasyia deal is suspended, the government seems expediently concerned to make the refugee detention system more manageable, rather than ending the system. But the problem will not stop until every single asylum seeker is released from these concentration camps,” said Benjamin Solah, spokesperson for the Refugee Action Collective (Victoria).

Hazara asylum seeker Ismail Jan from Villawood is facing deportation back to Afghanistan this weekend. There are last minute legal challenges in an attempt to stop this happening. The situation in Afghanistan is still very dangerous. Lets stand together to demand a stop to this and any deportation to danger. Let them stay.

With speakers from the Hazara community, refugee advocates and community members.

Spread the word, bring banners and be vocal on this issue. Facebook event here!

Say it loud, say it clear, refugees are welcome here!

Despite the hot weather, 350 dedicated supporters of refugee rights rallied in Melbourne on Saturday demanding an end to mandatory detention and saying loudly and proudly that refugees are welcome in Australia. 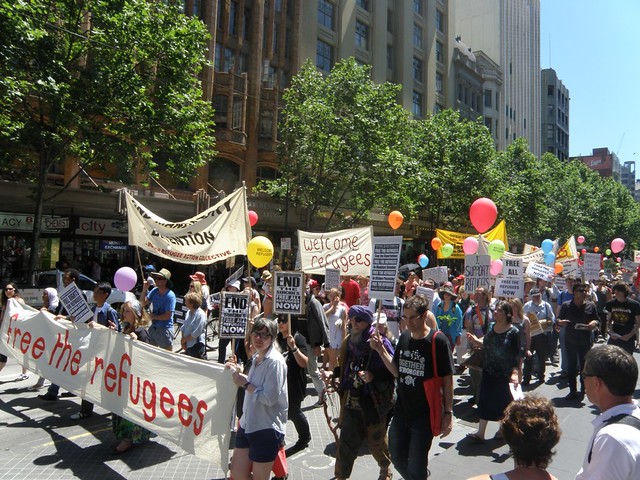 We hope to see you in December in Sydney for the rally outside the ALP Conference which will be crucial to the debate on offshore processing.