The Hidden Hell for Refugees in the Heart of Melbourne

Refugee Action Collective Public Meeting:
The Hidden Hell for Refugees in the Heart of Melbourne
– Let them Out, Let Them Stay

A prison for refugees, the Melbourne Immigration Transit Centre (MITA) is located in Broadmeadows, Melbourne.
MITA is in crisis holding many long term detainees, some held indefinitely with no end in sight. A 23yr old Afghan man died there on Fri 12 July. He came to Australia 6 years ago as an unaccompanied minor. His death in detention is yet another at the hands of the Coalition government.

Priya, Nades, and their two Australian born children have been held in it for over a year and a half and face deportation to danger. Huyen and her baby Isobella have been held there for over a year. Huyen faces deportation to danger and permanent separation from her daughter and husband. Sivaguru a Tamil refugee has been held there ten years, he now has cancer and may die in this hell hole. Inside the walls, detainees are powerless and subject to abuse. Ali’s hand was broken by guards. Come and hear why both the onshore and offshore refugee prisons must be dismantled and how you can help. 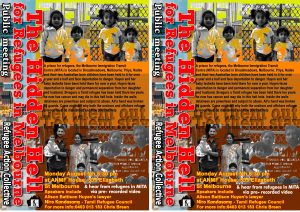