> Refugee Action Coalition
> MEDIA RELEASE
>
> NAURU SEARCH RULE CHANGES MAKES SEXUAL HARASSMENT OFFICIAL
>
> Reports of women asylum seekers and refugees  being sexually harassed
> while being searched on their way into RPC3, the camp accommodating
> families and single women, have emerged from Nauru.
>
> At least two of the searches, one conducted on 6 December and another
> on 11 December have been the subject of official complaints, and the
> guards involved have been identified. Refugee women on Nauru believe
> at least another five or six women have been subjected to the abusive
> searches since the rule change.
>
> No explanation has been given for the rule change, but the women
> involved believe that the guards are searching for smart phones, but
> also for perfume, lighter. Food and fruit brought from outside the
> camp is also confiscated.
>
> Around 4pm, Sunday 6 December, a married Iranian female asylum seeker
> was returning to RPC3 having attended church. She was searched by four
> Wilson guards, two women (believed to be Australian) and two men. The
> two female guards eventually forced to remove her shirt in view of the
> male guards standing a short distance away.
>
> Three days later, after lodging a formal complaint, she was visited in
> her tent by Wilson’s Security officials who told her that there were
> new rules regarding searches and that the guards could ‘touch their
> bodies.”
>
> On the night of 11 December, around 11pm, a single Iranian woman was
> stopped at the RPC3 gate by a group of Wilson Security guards, five
> men and one woman.  The female guard was an Australian national.
>
> When the woman entered the gate, a male guard searched her with a
> security wand. According to the new rule, apparently put into force
> around 6 December, a woman is required to spread her legs and her arms
> for such a search.
>
> This process has been an excuse for intimidating and abusive behaviour
> since it was implemented. Male guards have made the the searches
> intrusive and threatening. The wands are waved between the woman’s
> legs and often waved repeatedly over her breasts.
>
> The humiliating and threatening elements of such seaches are obvious,
> even if such searches are conducted by female guards in the presence
> of male guards.
>
> On the night on 11 December, the lranian woman was alone. She refused
> to spread her legs or arms for the male guard. Her refusal then bought
> a demand from the female guard told her she would have to lift up her
> T shirt and bra ‘because maybe you have something.” This was done in
> front of the male guards.
>
> After she had lifted her T shirt and bra, the female guard told her
> you have to go to a small room and remove all your clothes. The woman
> refused to go into the room, but did hand her ID to the female guard.
>
> However, when she tried to leave, a male guard stood in her way,
> repeating that she had to go into the small room at the guardhouse and
> remove her clothes. Anxious and frightened, at the whole situation,
> she refused but was forced to push past the male guard to leave the
> area.
>
> This asylum seeker, a previous victim of sexual assault and harassment
> inside the family camp was visited by Wilson’s officials who confirmed
> the new rules that allowed body searches.
>
> A few days after the search and after she had made an official
> complaint, the Iranian asylum seeker, told the Refugee Action
> Coalition, “I was very embarrassed and humiliated [by the searches],”
>
> On 18 December, this woman was asked to provide a second statement to
> two Wilson’s investigator who refused to give her a copy of the
> statement, but said it would report to ‘his boss in Sydney’.
>
> Despite the official complaints, the search regime is still in place.
> At the second interview the Wilson official confirmed that there are
> new search rules and repeated that she must spread her legs and arms
> to be searched, and that if the guards  believe you ‘have something’
> they can conduct a body search.
>
> “These instances of reported abuse on Nauru at the hands of Wilson
> guards are particularly shocking given the scale of abuse that has
> been uncovered and confirmed by previous Australian government and
> Senate inquiries. That a government contractor could put new search
> rules in place that allow for the continued abuse of vulnerable women
> on Nauru is inexcusable,” said Ian Rintoul, spokesperson for the
> Refugee Action Coalition.
>
> “It is impossible to describe the distress of the women who are
> subject to the demeaning and intrusive searches. It does amount to
> officially sanctioned sexual abuse.
>
> “It makes a mockery of the idea of that the detention centre on Nauru
> is an ‘open centre.’ It also makes a mockery of Malcolm Turnbull’s
> government’s supposed concern with violence against women – when the
> government turns a blind eye to the abuse of female asylum seekers and
> refugees on Nauru.
>
> “It is urgent that the new search regime is immediately ended. The
> searches have added an additional threatening dimension to detention
> on Nauru which is already overshadowed by violent sexual attacks
> outside of the detention centre.”
>
> For more information, contact Ian Rintoul , mob 0417 275 713.

Around 200 asylum seekers on bridging visas and refugees with
temporary protection visas (TPV) will stage a day-long protest, this
Friday, 11 December, outside the Sydney offices of the Department of
Immigration and Border Protection at 22 Lee Street. (Details below)

The protesters plan to stay outside the Immigration office from around
10.00am to 5.00pm. The protest will call for the right to work for
asylum seekers in the community; for the department to end the delays
in processing their claims and for permanent protection not TPVs for
those found to be in need of protection.

The Sydney protest follows a similar protest held in Canberra on 13
November, when around 250 bridging visa holders and their supporters
rallied outside Parliament House.

The protesters, mostly Iraqi asylum seekers and refugees, represent
the almost 30,000 asylum seekers in the community, many of them left
waiting for three years without even being interviewed., and denied
the right to ever see their families.

“In December 1014, the Immigration Minister, Scott Morrison promised
that people in the community on bridging visas would be given the
right to work. But that hasn’t happened. They have been left
destitute, while the Immigration department deliberately delays any
assessment of their refugee claims,” said Ian Rintoul, spokesperson
for the Refugee Action Coalition.

“The delays; the misery and uncertainty inflicted on asylum seekers
and refugees in the community is the flip-side of the brutality
inflicted offshore, on Manus and Nauru.”

Under Coalition policy, asylum seekers who arrive by boat, and who are
found to be refugees will only be granted temporary protection visas,
and are therefore denied the right to travel and the right to be
re-united with their families, many of whom themselves have been left
in dangerous situations. 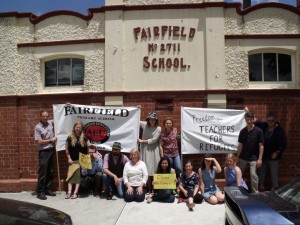