Media release
by RAC July 16, 2018
Twenty-one refugees flew from Nauru to the US today, Sunday 15 July (photo of some of the refugees and their friends at Nauru airport is attached) . The group comprised mostly single Afghan men, but also included one Rohingyan, one single Iranian woman, and a Tamil family.
The single Iranian woman was the first Iranian to be accepted from Nauru or Manus Island for resettlement in the US in 2018.
While intriguing, there is no expectation that the single women marks the end of the Trump’s ban on Iranian and  Somali refugees; more refugees from those countries were rejected on Nauru by the US in the past week.
“The US deal is drawing to a close on Nauru, but hundreds of refugees and asylum seekers are left with no future,” said Ian Rintoul spokesperson for the Refugee Action Coalition.
“This week with mark five years of the Pacific Solution Mark II, and for the majority of people dumped there, there is no end in sight. If the Gillard government had accepted New Zealand’s offer to take 150 refugee a year in 2013, there would be 750 already settled in New Zealand.
“It’s tome to end the aony of indefinite detention and bring all the refugees and asylum seekers to Australia.”
The refugees flying from Nauru today are leaving behind a dire medical situation that has seen a series of Federal court orders in Australia for adults and children to be taken off Nauru and brought to Australia.
They are aslo leaving behind a spate of local violence and crime of the kind that has added the nightmare of personal danger to the depair of their future.
On 10 July, a 24 year-old Somali woman was actually bashed by two Nauruan security guards in the HOST office, after her complaint about an a broken air-conditioner escalated. She spent six hours at the hospital and was left bruises, a swollen face and cuts inside her mouth.
A few days later (13 July), at Nibok refugee camp, locals at the front and back of the unit, attempted to kick their way into the accommodation of a Somali couple with a 10 month old baby.
The locals fled when neighbours came to the rescue of Somali couple. Despite calls, the Nauruan police refused to attend.
This weeks will see protests at MP’s offices (See: https://australianrefugeeactionnetwork.wordpress.com/five-years/ ) and demonstrations in Brisbane (20 July) and Sydney, Canberra, Melbourne and Perth on Sat 21 July.
For more information contact Ian Rintoul 0417 275 713 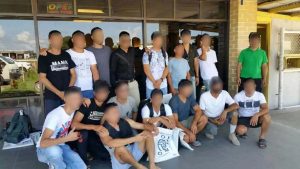