Canstruct, the Nauru detention management company, has declared a “threat level 3” (probable) at the RPC 1 and 3 in the aftermath of today’s suicide.

RPC 1 is the detention administrative centre and also houses the IHMS clinic, where the brother and the mother of the deceased Iranian man, “Farhad” (not his real name) were taken this morning.

RPC 3 is the detention centre weer around 250 people including children live in mouldy tents. Farhad’s body was found in a tent in RPC 3.

One man was arrested at the gate of RPC 3 this morning when a large crown gathered waiting for news of Farhad’s death.

The Nauru government has said that they are waiting for a doctor to come from Australia to perform an autopsy to confirm the cause of death.

“But we already know that peter Dutton and offshore detention is responsible for Farhad’s death,” said Ian Rintoul, spokesperson from the Refugee Action Coalition.

Farhad’s death has added to the growing crisis on Nauru.

People are already angry that the Afghan man dying of lung cancer is being prevented from spending his last months in Australia.

“Mental illness and medical neglect is deliberate government policy. Peter Dutton is quite willing to let people die and pretend that the Nauru government is responsible, ” said Ian Rintoul, spokesperson for the Refugee Action Coalition.

“Detention on Nauru has become a life sentence. It is time to call a halt to offshore detention, and bring them here.”

[Photos of police at RPC 1 gate, this afternoon, attached.] 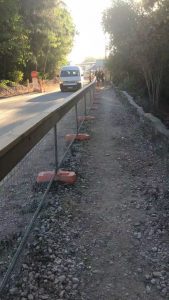 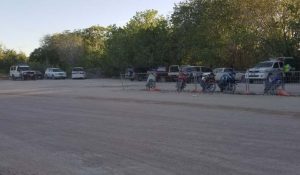