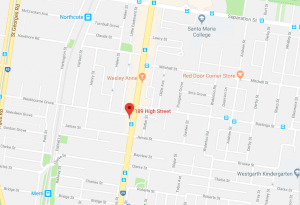 The Batman by-election is a chance to build a stronger refugee movement and put the ongoing cruelty of indefinite detention on Manus and Nauru into the national spotlight.

RAC has called a rally at Northcote Town Hall, for Sat 10 March, 11:30am. After the speakers at the Town Hall, we will march up High St to the corner of High and Separation Sts to distribute material for the 25 March Palm Sunday “Walk for Justice for Refugees” rally, and RAC’s election scorecard.

The Liberal government has created a humanitarian crisis on Manus and Nauru. The Liberals are not running in this election – but Labor continues to support the Liberal policies of boat turnbacks and offshore processing. The Greens oppose both. See RAC’s Batman election scorecard (available in pinned post below). There will be plenty of material for you to take away to raise the profile of refugees in the by-election, and after.

More to be announced 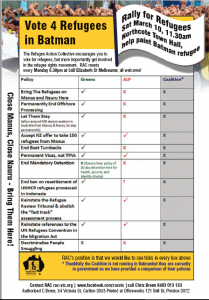