Except for one couple, a Rohingyan man and his wife, the other refugees  leaving today (Sunday, 11 February) are single men Afghans, Pakistanis, and Rohingyan.

It is expected that altogether around 130 refugees will fly from Nauru to the United States this month.

As usual, the departure of the refugees highlights the flaws in the US resettlement process.  Last week, Iranian refugees – the largest national group of refugees on Nauru – protested for the second week in a row, over Iranians being excluded from the US intake.

Also among the people leaving today is one Rohingyan refugee who has family in Australia. He told the Refugee Action Coalition that he asked Australia for protection, and had initially declined to go to the United States.

“I don’t know anyone there,” he told the Refugee Action Coalition.  The man had been told if he declined to go to the US, he could expect to be on Nauru for 20 years, or could go to Cambodia.

The departure of the refugees comes as Nauru makes the first medical transfers to Taiwan in an attempt to deal with the fundamental the lack of medical facilities on the island.  Three refugees were sent to Taiwan for medical treatment last Wednesday. 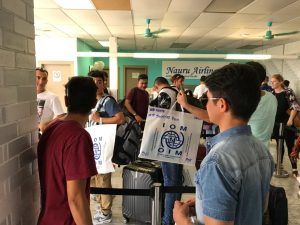 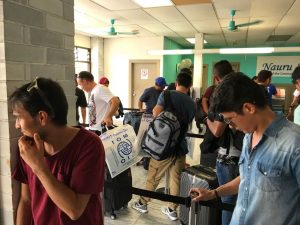