Asylum seekers at the Hillside Camp, Manus Island have expelled all ex-Wilson Security guards from their camp area.

Former Wilson’s guards, who used to work at the detention centre, are now employed by Paladin, the company contracted to provide security for the new camps, since asylum seekers and refugees were forcibly evicted from the Lombrum detention centre.

But the Wilson guards are also among those who brutalised the asylum seekers and refugees during the 24 days of siege of the detention centre, when food, water and power was cut off.

“We have told them that they are not allowed to work at Hillside. We do not need them; we do not want them. All our security is local now. We don’t want the Australians who mistreated us in the detention centre. For four and half years, they tortured us,” one of the Hillside asylum seekers told the Refugee Action Coalition.

“We told them that any Wilson’s guys come here, they will be run out. It is as simple as that. If they want trouble bring the Wilson’s guards; if they don’t want trouble keep them away. We won’t let them work here,” the asylum seeker said.

The police and Paladin managers left the camp, without incident.

The stand at Hillside comes only days after local leaders blockaded the East Lorengau camp in a dispute over local contracts for detention services on the island.

The clash with Wilson’s also comes after a protest in Port Moresby on 22 December, when refugees and asylum seekers again requested that they be paid their weekly allowance that has been withheld for months.

When confronted at their office in the motel, with demands that they pay the allowance or leave the motel; the Wilson guards left the motel.

Meanwhile the protests for a “safe, third country” also continue; with yesterday (Wednesday) protest being was the 147th day of protest on Manus. (Photo of East Lorengau protest attached.)

The lack of medical facilities for asylum seekers and refugees also continues to take its toll.  An Iranian asylum seeker was medically evacuated from Port Moresby to Australia, on Wednesday 27 December. 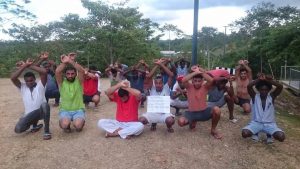 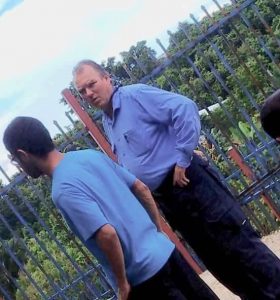