2017 Media Releases, Media release
by RAC October 26, 2017
Refugee Action Coalition
MEDIA RELEASE
END THE MANUS SIEGE; RESTORE FOOD AND SERVICES
Refugee groups have called for the Australian government to end the siege of the Manus detention centre.
After ignoring a PNG Supreme Court ruling since April 2016, the government is resorting to depriving refugees and asylum seekers of food, water and medical care as they try to force people out of the detention centre.
The latest notice (attached) says that mess facilities will cease on Sunday and that food packs will be issued on Sunday – enough for two days.
Previous notices have indicated that all personnel will be withdrawn and water and power will be cut off on 31 October and that the navy will occupy the centre on 1 November.
Today (Thursday) is the last day that buses will run from the detention centre to the Lorengau settlement area.
“Even though services are being cut off, there is now no way for refugees to leave the detention centre,” said Ian Rintoul, spokesperson  for the Refugee Action Coalition.
NOT MOVING
Despite the looming deadline, none of the detainees are going to move to Lorengau. Today, Thursday 26 October)  is day 87 of protests inside the detention centre. (Photo attached).
The announcement came as a 39 year-old Afghan refugee was urgently medivacced, in a serious condition, from Manus Island to Port Moresby Wednesday night, suffering from sepsis  as infection spread from an injured foot the same kind of infection that killed Hamed Khazaie a year ago.
The latest moves come as further legal action is being prepared in the PNG Supreme Court seeking an injunction against the closure of the detention centre and orders to fully restore services until arrangements are made for the refugees to travel to safe third countries.
“The whole world is watching Manus Island  as the government resorts to medieval brutality to force refugees into even more unsafe unsafe circumstances on Manus Island. The government needs to act urgently to end the siege of Manus. The government has sunk to a new low trying to starve defenceless people into submission.
“The government is deliberately orchestrating a humanitarian disaster and callously disregarding its obligations to keep these people safe,” said Rintoul.
The Refugee Action Coalition is holding a protest at Sydney Commonwealth government offices, Tuesday, 31 October, 12.30pm, cnr Bent and Bligh Sts, Sydney.
(Melbourne protest is Friday, 27 October, 4.30pm, offices of Border Force, Lonsdale Street)
For more information contact Ian Rintoul 0417 275 713
Manus notice here 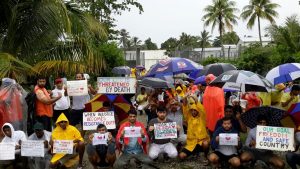