2017 Media Releases, Media release
by RAC October 13, 2017
Refugee Action Coalition
MEDIA RELEASE
RESETTLEMENT FARCE AS MANUS REFUGEES FACE MORE THREATS
The latest notice on Manus Island (see attached) announces the next stage in trying to force refugees out of the detention centre and into greater danger in the Lorengau settlement.
Refugees can no longer purchase anything at the detention centre canteen, nor will they receive points that can be used at the canteen.
Refugees have been told that they must transfer to East Lorengau Transit Accommodation – where robberies and bashings are common. Two refugees housed at East Lorengau have committed suicide in the last two months.
Now refugees and asylum seekers are banned from using the sports field adjacent to the detention centre. “Trespassers” are threatened with being turned over to the PNG police Mobile Squad, a police outfit renowned for its brutality.
“The government is ruthlessly following a policy of collective punishment to effectively starve refugees into submission, and deprive them of services, safety, and medical help,” said Ian Rintoul, spokesperson for the Refugee Action Coalition.
These notices were issued at the same time that the government made the farcical announcement that refugees would be allowed to apply to transfer from Manus to Nauru.
“The transfer offer is absurd,” said Ian Rintoul, “Except for perhaps one or two people who have been kept separated for years from their families or partners on Nauru, no-one is going to transfer.”
“However, the notice does reveal that the government has no confidence in the US deal. If people were going to be resettled in the US, why is the government offering transfers from Manus to Nauru.”
An even more revealing Nauru government notice that poses questions over the US deal, is being circulated among refugees in Port Moresby. It seems to go further than an earlier notice and declares that Manus refugees (not just those ‘in the US resettlement process’) can express an interest in transferring to Nauru and ‘…pursue resettlement in the United States  or could stay in Nauru for up to 20 years.’
“The government is thrashing around pretending it has a resettlement plan for the refugees on Manus and Nauru,” said Rintoul, “But there are no guaranteed resettlement options. The refugees and asylum seekers are hostage to blind government policy.
“Every day, Manus slides further into a morass of human rights abuse and government indifference. The situation on both Manus and Nauru is increasingly urgent. The only safe option is to evacuate the prison camps and to bring all those on Manus and Nauru to Australia.”
BRING THE ROHINGYAN REFUGEES HERE TOO
Over 500,000 Rohingyans have fled ethnic cleansing in Myanmar over the last two months, yet Australia has not yet agreed to take any Rohingyan refugees. Over 150 Rohingyan refugees are on Manus and Nauru. Some are being held in mainland detention centres.
The Turnbull government should lift the ban on UNHCR refugee from Indonesia, and the policies that prevents family reunions for refugees who arrive by boat.
Australia took 12,000 Syrian refugees after popular pressure forced then Prime Minister ,Tony Abbott, to relent.  Australia should take in many more Rohingyans from the crisis is in its own backyard. The Greens call for Australia to take 20,000 Rohingyan refugees would be a good start.
For more information contact Ian Rintoul 0417 275 713
Manus notice 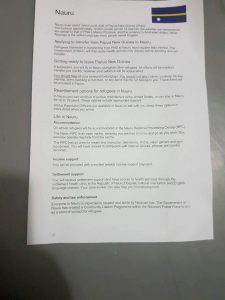