2017 Media Releases
by RAC August 2, 2017
MEDIA RELEASE
FOXTROT PROTEST DEFIES MOVE ORDERS
A mass protest at the Foxtrot compound on Manus Island has defied Border Force orders to move and demanded that power and water be officially restored to the compound. (Photos attached) .
The protest gathered at 2pm at Foxtrot compound chanted, “We do not want to settle in PNG; do not force us.”
PNG immigration and Border Force did not respond to their call to come to Foxtrot to discuss the situation.
They have also re-iterated their determination that no refugees will move to East Lorengau.
Refugees and asylum seekers are still living in the Foxtrot compound. Refugee electricians have ensure that their is power to the accommodation rooms of the compound.
“We are fearful that they will try to cut the water from Oscar and Delta compounds so we have taken a stand at Foxtrot,” one refugee told the Refugee Action Coalition from the protest.
Meanwhile, frustration at the lies and resettlement delays on Nauru has sparked renewed mass protests at the detention centre on Sunday and Monday nights.
The Refugee Action Coalition has called a snap “Bring Them Here” protest to demand an end to the intimidation and forced moves on Manus – Thursday, 3 August, 5.15 pm (for 5.30 start) at Malcolm Turnbull’s office, 287 New South Head Road, Edgecliff (near Edgecliff station).
The protest will also raise the victim the tragic circumstances for asylum seekers in the Australian community that ed to the attempted self-immolation by an Iranian man at the Sydney immigration office on Friday, 28 July.
For more information contact Ian Rintoul 0417 275 713 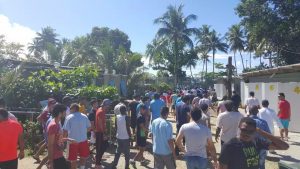