A out-of-hours special Federal Court today (Sunday, 19 Feb)  hearing has granted an injunction to prevent Serco and Border from seizing mobile phones from detainees in onshore immigration detention, just hours before the order was to come into effect.

Action Alert: No to Trump & Turnbull – Let The Refugees In, Feb 18 Melb Rally

No Muslim Ban, No Wall, No Camps
The US Deal is No Solution – Bring Them Here

The Turnbull government has refused to condemn Trump’s racist Muslim and refugee ban, instead Turnbull claims Trump is “emulating” his own border protection policies. Former Immigration Minister Scott Morrison boasted that the US is “catching up” with Australia.

“The rally will highlight the inadequacy of the US Refugee Deal for those on Manus and Nauru.” continued Breen “Trump’s scorn for the “dumb deal” raises serious questions about whether it will go ahead at all. In any case it is at least 400 places short, there is no timeframe, and no-one knows what ‘extreme vetting’ will mean for people who have already been ‘vetted’.

“The plight of cartoonist Eaten Fish who has been on hunger strike on Manus Island since Jan 31 shows up the deal’s short comings. He has given a negative refugee determination without fair process, he cannot be returned to Iran, he is not eligible for the US deal and remains trapped on Manus Island in the detention centre that was declared illegal 10 months ago. His life is in the Turnbull government’s hands.”

“This year will be the fourth year of hell for those on Manus and Nauru. They should not wait one day longer for freedom. Australia sent them there, it can bring them back. This rally will demand the Turnbull government bring the refuges to safety here.” 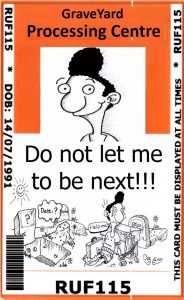 How you can help?

For three and a half years, Eaten Fish has been detained on Manus Island Region Regional Processing Centre. He suffers from grave mental health issues, extreme Obsessive Compulsive Disorder (OCD), panic attacks that can leave him paralysed and complex Post-Traumatic Stress Disorder (PTSD). He sometimes scrubs himself until he bleeds.

On Manus, Eaten Fish has allegedly been the victim of sexual assault and ongoing sexual harassment

Due to his extremely fragile mental health, he has been held in the Special Supported Accommodation compound, also referred to as Green Zone, for the past eight months and is under 24 hour watch now.

Eaten Fish has been on a hunger strike since the 31stJanuary 2017, and now weighs 47 kgs.

In a letter to Australian Border Force Chief Medical Officer Dr John Brayley, Janet Galbraith, an asylum seeker advocate, writes: “he [Eaten Fish] is shaky, weak, has a lot of body pain, no longer feels hunger, is losing his memory and his heart is beating fast.  He says he can no longer shower.”

PNG authorities have rejected Eaten Fish’ application for refugee status despite the fact that he was too ill to participate adequately in the determination process. He has been told he must return to Iran despite his severe mental illness.

While Iran presently does not accept asylum seekers that are involuntarily returned, PNG authorities have recently begun to forcibly deport asylum seekers with negative assessments. Two Nepalese men were targeted first and there is immense pressure on others to accept ‘voluntary’ removals.

There is a growing campaign internationally calling on the Australian government to bring Eaten Fish to Australia so that he can be in a safe place and receive the specialist medical treatment he needs for recovery.

On 14 February, Scott Ludlam, WA Senator and Greens co-deputy leader, spoke in the Senate about the plight of Eaten Fish.

Last year CRNI gave Eaten Fish their Courage in Editorial Cartooning award, saying: “CRNI believes that his body of work will be recognised as some of the most important in documenting and communicating the human rights abuses and excruciating agony of daily life in this notorious and illegal prison camp…His work is addressed to the critical eyes of the world while exposing the xenophobic and racist policies of the Australian government in their dealings with immigrant refugees.”

First Dog On The Moon, beloved Australian political cartoonist, also started a campaign in 2016 called “Save Eaten Fish” asking cartoonists in Australia and abroad to send in drawings in solidarity with Eaten Fish.

Using the hashtag #SaveEatenFish #AddAFish, cartoonists and artists across the globe have uploaded their drawings on twitter.

The Refugee Action Collective applauds these efforts and encourages cartoonists and artists to participate.

The case of Eaten Fish is an example of the inhumanity and cruelty of Australian immigration policy. We urge the Australian Government to transfer this critically ill young asylum seeker to Australia before there is another tragic and avoidable death on Manus Island.

We call on the government to close the camps and bring the 1600 men, women and children who are being traumatized in these offshore hell-holes to Australia.