More than 200 refugees on Manus Island have signed a letter (text below, photos attached) calling for a Royal Commission to fully investigate IHMS (the Manus detention medical provider contracted to the Australian government) and its political control by Australia’s Department of Immigration and Border Protection.

Shortcomings and negligence by IHMS and the DIBP have already been revealed by the inquest into the death of Hamid Khazaie, the refugee who died in Brisbane in 2014, after being transferred from Manus.

Calls are growing for a Royal Commission into IHMS, the lack of facilities and the culture of dismissal and neglect that characterises medical services on Manus Island.

“We waited two years for the inquest into the death of Hamid Khazaie. The asylum seekers and refugees cannot wait another two years for another inquest. The revelations of the inquiry into Hamid’s death in 2014 have been horrifying.

“That urgent medical decisions are not made by medical staff but require the sanction of Border Force officials are the kind of Machiavellian arrangements that are concerned with political control, not care.

“They cry crocodile tears over deaths at sea while their  punitive control of offshore detention control cost the lives of refugees.

“For the refugees on Manus, the US deal is a mirage. The government must make immediate arrangements to bring them here,” said Ian Rintoul, of the Refugee Action Coalition.

Vigils for Faysal Ishak Ahmed, the Sudanese refugee who died in Brisbane after being medi-vacced to Brisbane hospital, will be held around the country over the next week, beginning with Brisbane and Newcastle today (Thursday) followed by Sydney on Friday, 30 December, through to Melbourne on 3 January.

Sydney’s vigil will be held on Friday, 30 December, at Hyde Park, near St James Station, 6.00-7.00pm. Speakers will include: Fr Rod Bower; Dr Barri Phataford (Doctors for Refugees), George Newhouse, human rights lawyer, and a representative of the Sudanese community

Letter signed by over 200 detainees, calling for Royal Commission:
Text:

To the Royal Commission:

to Australian politicians, Labor , The Greens, the government and Human Rights Commission

We refugees in the Manus prison lost another friend Faysal Ishak from Sudan in the past few days. Faysal was sick and had heart problems for more that six months but IHMS, the company that has responsibility for our health, did not care about him and did not provide any treatment for him.

Faysal filled in request forms for medical treatment and wrote complaints more than 20 times but IHMS did not provide any treatment for him. More than 60 people signed a letter and asked IHMS to help to him.

We are writing this letter to you [to request that royal commission to fully investigate IHMS, the provider of medical services and its control by Border Force.  we ask that royal commission investigate how and why IHMS killed Faysal Ishak in systematic torture. More than 400 people in Manus prison need emergency medical treatment and we are worried about our health.

Finally we would like to mention that the PNG Supreme Vourt ordered in April 2016 that this prison is illegal but the Australian government has not accepted the court decision.

Signed by over 200 Manus refugees and asylum seekers 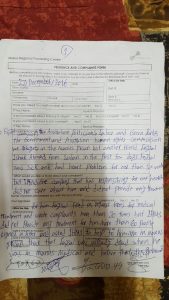 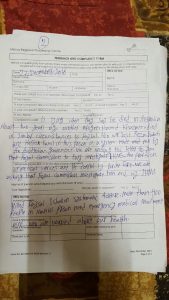