The fire that gutted the unit in the Nauru refugee camp, Anuijo, on Monday, May 23, was part of a suicide attempt, according the husband of the woman who was rescued from the burning unit.  (Photos and videos of the first available on request.)

The Iranian woman was given oxygen at the Nauru hospital after being rescued from the unit. He husband and son were not at home when the room was engulfed in flames.

The family, including their 5 year-old son, is now being held, under surveillance in OPC1.

A message from the husband of the 30 year-old Iranian woman says that his wife has suffered depression ‘for a long time,’ and had attempted suicide on other occasions.

She had told medical service providers, IHMS that she intended to kill herself, “But no-one paid any attention,” he said.

Although the message does not say how the fire was set, her husband says, “Today she locked herself inside that room, and tried to commit suicide.” The husband’s account fits with the fact that security guards had to break into the room to rescue the woman.

The suicide attempt is the latest in a series of suicides and serious attempted suicides on Nauru as despair has taken hold of the population of asylum seekers and refugees on Nauru.

The Nauruan government’s growing practise of criminalising suicide by arresting and charging already vulnerable people for attempting suicide is only adding to the anguish and disquiet on Nauru.

Donate to help the Refugee Action Collective get large ‘rock’ sized posters up all over Melbourne in the lead up to the federal election. This can be a counterwieght to scapegoating of refugees and add to pressure to Close Manus & Nauru. The poster is available at the link below & will advertise the World Refugee Day rally.
https://chuffed.org/project/bring-them-here-posters 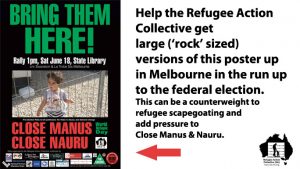 The Refugee Action Collective encourages you to vote for refugees, but more importantly get involved in the refugee rights movement. Whoever wins the election we will have a fight on our hands to Close Manus and Nauru and free the refugees. Help build that fight now: Come to our pre-election World Refugee Day rally Sat June 18. RAC meets every Monday 6.30pm at 540 Elizabeth St Melbourne, come along and get involved!

RAC’s position is that we would like to see YES  in every box above. A number of smaller left wing groups that routinely run in federal elections have positive refugee policies for all the categories listed above.