Refugee Action Coalition
> MEDIA RELEASE
>
> TEENAGERS INJURED BY GUARDS IN NAURU PROTEST
>
> Around 7.30pm Wednesday night, eight teenagers and their families were
> summoned to receive a letter from Australian Border Force in reply to
> their protest letter sent two days ago. (Letter below)
>
> As the dismissive quality of the ABF letter became obvious –
> including absurd statements about the quality of medical conditions
> and education on Nauru, or going to Cambodia – an angry protest
> developed.
>
> (The Nauru school is dilapidated and conditions are rudimentary at
> best – see photo below – other available on request. )
>
> Australian Wilson guards lashed out at the teenagers, inflicting minor
> injuries. Others in the family compound, including
> women, compound were pushed over by the guards.
>
> “Guards hit us and kicked us, “ one of the teenagers told the Refugee
> Action Coalition.
>
> One woman who was pushed over in the fracas has suffered a heart
> attack and was taken to the IHMS clinic. Another woman who swallowed
> washing powder in the aftermath of the protest is also in the IHMS
> clinic.
>
> The guards eventually retreated from the compound.
>
> The protests continued late into the night, with cries of, “We are not
> animals,” “You don’t answer.”
>
> The head Wilson guard refused to respond to the complaints about the
> assaults and injuries inflicted on the asylum seekers. The guard told
> the protesters that the complaints about the assaults would be taken
> ‘to the big boss tonight’ and there would be a response, today
> Thursday, 7 April.
>
> The escalation in the protests comes after 18 days of daily protests
> at the family compound. A sign of the deteriorating situation on Nauru
> was the graffiti, ABF=卐 , which appeared a wall inside the family
> compound on Sunday night.
>
> “Until the government addresses the fundamental problem with Nauru,
> the protests will continue,” said Ian Rintoul, spokesperson for the
> Refugee Action Coalition, “The asylum seekers were selectively
> discriminated against when they were sent there. Some have waited ‘in
> hell’ for three years without having a refugee determination.
>
> “The Minister has boasted that getting children out of detention was
> always a goal of the Turnbull government, but that claim is at odds
> with the fact that children, women and men are being held on Nauru –
> and that the 267 who are presently in Australia are still being
> threatened to be returned to the prison island.”
>
> Video clip available on request.
>
> For more information contact Ian Rintoul 0417 275 713. 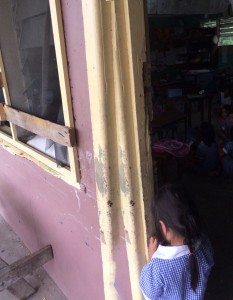 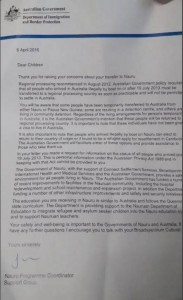 Refugee Action Coalition
>
> MEDIA RELEASE
>
> PROTESTS ESCALATE ON NAURU
>
> Daily protests continue at the RPC 3 family compound despite
> increasing efforts by Immigration and the Nauru police to stifle them.
> (Photo of Monday’s gate protest below)
>
> More protests are expected today as the asylum seekers were promised a
> response, by today, from Australia’s Border Force by today following
> tent-top protests by children detained in the RPC 3 camp, over two
> nights on the weekend.
>
> Border Force agreed to send a letter written by the children to
> Canberra outlining their concerns. In particular the letter highlights
> that some people who were on the same boat and other who arrived after
> 19 July 2013 have been allowed to make protection applications and
> will be resettled in Australia.
>
> The letter demands that they be treated the same as the people who
> were allowed to stay in Australia even though they arrived after 19
> July 2013.
>
> Anti-ABF graffitti (ABF= 卐, photo below) appeared overnight Sunday
> on a wall in Anijuw, a compound inside RPC3 after Nauru police
> confiscated four phones from refugees filming the protests, at the
> behest of the ABF.
>
> No response has been received from ABF by this afternoon, although the
> family of one of the boys in the roof-top protests received a positive
> determination this afternoon (Wednesday, 6 April).
>
> “We are very angry,” one asylum seeker told the Refugee Action
> Coalition, “They are trying to separate us. We have been kept in hell
> for three years. Why are we in Nauru?”
>
> For more information contact Ian Rintoul 0417 275 713 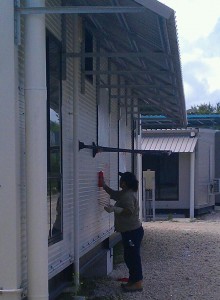 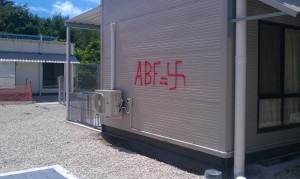