Refugee Action Coalition
> MEDIA RELEASE
>
> NAURU PROTESTS CONTINUE DESPITE THE FENCE
>
> Nauru asylum seekers in the family compound RPC 3 have protested their
> long term detention for the tenth day in a row. Despite the fence
> erected across the main detention road to prevent the protesters
> actually reaching the gate of the detention centre, women, men and
> children march to the fence to hold their protest.
>
> Photos below.
>
> For more information contact Ian Rintoul mob 0417 275 713 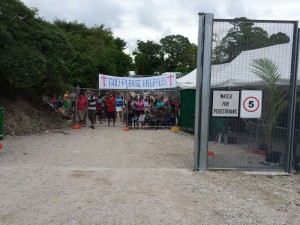 Asylum seekers and refugees were told (i) that all refugee processed
will end by 31 March; (ii) those with negative determinations will
their appeal resolved by 31 June; (iii) from 6 April, those found to
be refugees will be separated from those who have negative
determinations. Those found to be refugees will be housed in Delta and
Oscar, while found not to be refugee will be housed in Mike and
Foxtrot compounds. People will be moved forcibly after the 6 April if
necessary, but any person who moved earlier will receive 50 points
that can be used at the detention centre canteen. Anyone who refuses
to move will have their points cut; meaning they will no longer have
access to the canteen for supplies or phone cards.

It is rumoured that extra guards have been flown from Australia, but
that cannot be confirmed.

Those who have been found to be refugees have also been threatened
that they have to accept resettlement in PNG or they will be forcibly
removed from PNG; something the government is not able to legally
carry out.

It is unclear what the announcement means for the 60-odd people who
have refused to accept processing in PNG in protest at being forcibly
transported to Manus Island from Australia, where they did ask for
asylum on arrival.

“There is every sign that the PNG Immigration and the Australian
immigration are panicked at the possibility that they will lose the
Supreme Court challenge to Manus Island detention that is scheduled to
start in late April,” said Ian Rintoul, spokesperson for the Refugee
Action Coalition.

“Immigration routinely makes threats and restricts rights in the
effort to force people to leave the detention centre or return to
their home countries. The cash offer to ‘voluntarily’ return home has
recently been increased to $10,000 but no-one has accepted it.”

Of the hundreds who have been found to be refugees, only around 60
have been willing to move out of the centre to the so-called transit
accommodation at East Lorengau on Manus Island.

One Manus refugee told the Refugee Action Coalition, “ The message was
clear for us – whether you are a refugee or not, they want to clear
the detention centre. But there is no safety in PNG.”

“It is always disappointing to see the immigration department
inflicting further punishment on asylum seekers and refugees rather
than face up to the failure of the offshore detention regime,” said
Rintoul, “They are desperate to avoid the consequences of a successful
court challenge which could find that the Manus detention centre has
never been constitutional and that human rights of asylum seekers have
been breached from day one.”

The announcement has increased tensions at the detention centre. A
majority have already decided they will not cooperate with any attempt
to force them to move compounds,

> IRANIAN ASYLUM SEEKER MEDIVACCED FROM MANUS AFTER HEART ATTACK> > A 38 year-old Iranian asylum seeker has been medivacced from Manus > Island to a Brisbane hospital this morning (Wednesday 23 March) after > suffering a heart attack yesterday afternoon.> > The man suffered the heart attack, around 4pm, on a soccer field near > the detention centre. He was given CPR by a Wilson’s guard whose > action saved the man’s life, say other asylum seekers at the scene.> > The Iranian man was one of those who were injured in the attack on the > detention centre in February 2014, which resulted in the killing of > Reza Berati.> > Like others sent to Manus, he has been infected with malaria since he > was sent there in August 2013. In June 2015, he suffered a bad malaria > attack that required him to be transferred to Port Morseby hospital > for treatment.> > He is the second asylum seeker in four weeks to be transferred from > Manus Island because of heart problems.> > The medical evacuation comes just a few weeks before the start of the > coronial inquiry into the death of Hamid Khazaie, who died in Brisbane > from septicaemia after being medivacced from Manus Island in September > 2014.> > “The sooner Manus Island is closed, the better,” said Ian Rintoul, > spokesperson for the Refugee Action Coalition. “The emergency only > highlights the appalling injustice inflicted on asylum seekers sent to > Manus Island who have held in shocking conditions for more than two > and half years.”> > For more information, contact Ian Rintoul 0417 275 713