As Immigration Minister Morrison presided over a detention regime which oversaw very high levels of self-harm and mental distress for children in detention. The Forgotten Children report says “The Department of Immigration and Border Protection confirmed that during a 15 month period from January 2013 to March 2014, 128 children in detention engaged in actual self-harm. One hundred and seventy-one children threatened self-harm”. In addition 33 sexual assaults involving children took place in this period.

Scott Morrison is not someone who can be trusted with children. His new agenda for childcare shows that his cruelty does not stop at the border. All kids deserve quality childcare – and FREEDOM!

Join the protest calling for “Kids out of detention, not out of childcare!”

In light of escalated deportation efforts by the Abbott government, Phil Glendenning (who is in Melbourne for one night only) discusses the conditions which face refugees returned to danger. Glendenning is President of the Refugee Council of Australia, and led the Edmund Rice Centre’s research team for the Deported To Danger series of reports. This series monitored the safety of rejected asylum seekers in 22 countries, and resulted in an internationally screened documentary, A Well Founded Fear. The Abbott government has recently returned asylum seekers to persecution in Vietnam without assessing their asylum claims, forced a Hazara man back to torture in Afghanistan, attempted to secure cooperation with Iran for forced returns, and has changed Australian law so that authorities can ignore the risk of death, torture or imprisonment faced by asylum seekers who have been forcibly deported. Join Phil as he exposes the effects of current government policies, and participate in discussions on how we can build upon growing demands for change. For more info call Peter (0409 866 414) or Georgie (0422 591 825).

Rally location is marked with a purple and yellow circle below. 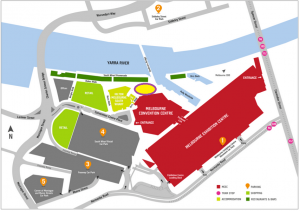 Abbott’s refugee bashing is not working for him at the polls, but if the Coalition is kicked out what policies will replace him?

Tragically the ALP leaders continue to support both offshore processing and mandatory detention. Labor for Refugees, with the backing of many unions will be proposing a resolution to change Labor policy at this year’s ALP national conference – Melbourne, July 24-26.

We don’t yet know the content of that motion, but we do know that offshore processing will be an important debate at the conference where numbers will be finely balanced.

Breaking the bipartisan consensus of cruelty towards refugees has long been a strategic goal of the refugee movement. To that end the Refugee Action Collective in Melbourne invites all RAC groups and refugee rights supporters nationally, to converge on Melbourne for a rally for refugee rights to support efforts to change ALP policy. We want the ALP to oppose offshore processing and mandatory detention, and continue its opposition to TPVs.

The rally will be at 12pm Sat July 25 outside the Melbourne Convention Centre. We will invite speakers from Labor4Refugees and the union movement, and encourage union and Labor branch banners.

We also intend to hold a national get together/conference of RAC groups and refugee rights supporters on the Sunday July 26. More details will be available soon, but we welcome input into the content/structure of the day.

RAC Melbourne will be able to arrange limited billeting for interstate activists. Please let us know if people from your state can participate and likely numbers. Endorsements can also be sent to  refugeeactioncollective@gmail.com, or call Chris 0403 013 183