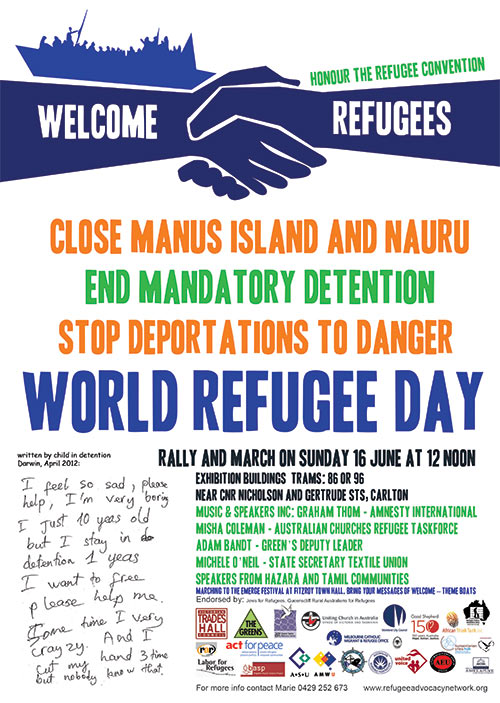 Speakers from Hazara and Tamil communities

Marching to the EMERGE Festival at Fitzroy Town Hall. Bring your messages of welcome – theme boats

The Refugee Advocacy Network is calling on all groups and individuals who support asylum seekers and refugees to stand up and be counted at the 2013 World Refugee Day Rally.

We want to send a clear message to the government and the opposition that Australians will no longer tolerate the cruel policies which imprison asylum seekers and refugees who arrive by boat. It is almost 12 months since the federal government re-opened detention centres on Nauru and Manus Island. With the prospect of asylum seekers’ being held there for years, self-harm, attempted suicides and hunger strikes began shortly after the detention centres opened.

There are now around 1000 children in detention.

In the mainland detention centres, there are asylum seekers and refugees in long-term indefinite detention. Many of these people have been recognised as refugees but have received negative security assessments through unreviewable processes by the secretive ASIO. Others have been recognised as refugees but are being held in long term detention because they “don’t have good character” – perhaps because they participated in a hunger strike or a protest or argued with a guard.

Around 1000 Tamil asylum seekers have not been allowed to apply for asylum and were “screened out” of the asylum process then deported. The immigration department is targeting a list of Tamils and Hazara to deport to Sri Lanka and Afghanistan even though we know that conditions in these countries are dangerous for returned asylum seekers. Canada has recently stopped deporting people to SriLanka because their safety cannot be guaranteed.

The refugee movement has been campaigning for all asylum seekers including those who arrive by boat to be allowed into Australia, and have their claims processed here. We call for an end to the system of mandatory detention and for asylum seekers to be allowed to live in the community, with the right to work, while their claims are being processed.

.
The Australian Government must protect the rights of asylum seekers and honour the spirit of the UN Refugee Convention.
Plan for your group to be well represented to ensure that this rally demonstrates the breadth of community support for refugee rights.

For information, visit http://refugeeadvocacynetwork.org/.
For further info phone Marie on 0409 252 673 or email trconcepts@netspace.net.au