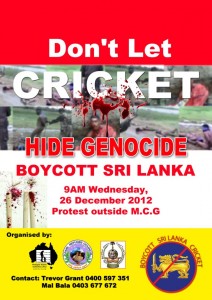 Read about why RAC is calling for a boycott:

This year, inspired by the spirit of Anti-Apartheid sporting boycotts, the Tamil Refugee Council and the Refugee Action Collective Victoria are asking you to join our call for a boycott of the Sri Lankan Cricket team.

For too long, Australia has turned a blind eye to the mounting evidence that the ruling regime in Sri Lanka has committed war crimes, including the slaughter of more than 40,000 innocent Tamil civilians at the end of the civil war in 2009.

This cricket season, Australia’s attention will be trained on the batting and bowling of the Sri Lankan cricket team at the Melbourne Cricket Ground. By calling for a boycott we can expose the human rights abuses that the Sri Lankan cricketers just can’t hide. And we can encourage our own government to recognise that refugees from Sri Lanka are fleeing genuine persecution.

The militarisation and permanent state of fear in Tamil areas of Sri Lanka has been maintained by the government ever since the civil war in 2009. The traditional Tamil areas are under occupation and the government is employing policies of displacement. According to a report in June 2012 in the prestigious Indian Economic and Political Weekly, there is a solider for every five people in the North of the country.

The rate of abduction has increased in the last three years after the war. According to one reputed newspaper in Colombo there has been one abduction reported every five days since the war ended. At least 44 media workers and journalists have disappeared since 2010, and no single perpetrator has been brought to justice.

The killing and torture of Tamils, as well as Sinhalese journalists and critics continues today. This continued brutality is the reason for the increased number of Sri Lankan refugees trying to make it to Australia for protection. Yet last year Julia Gillard welcomed the man who has presided over these injustices, Mahinda Rajapkse, with a warm handshake at the Commonwealth Heads of Government Meeting (CHOGM) in Perth last year.

Canadian Prime Minister Stephen Harper has already said he will boycott the biennial CHOGM event in November 2013 unless Sri Lanka’s human rights record improves, and David Cameron of Britain is under pressure to do the same. Britain’s high court has halted the deportation of Tamil refugee claimants over concerns that they face torture on their return.

Likewise, the late Peter Roebuck, Australian cricket’s most respected commentator  wrote that cricket was “obliged” to confront the Sri Lankan government’s atrocities, unlike several years ago when it “ignored the state-sponsored slaughter of Tamils in Sri Lanka……” . In The Age last year he revealed the concern Australian players had about the human rights abuses occurring in Sril Lanka.

“The recent expose of the systematic execution, rape and abuse of Tamils in the closing stages of the civil war in Sri Lanka has provoked deep consternation among cricketers, “ he wrote. “One prominent player has been having nightmares since ‘Four Corners’ aired the Channel  4 report, and the Players’ Association has been asked to intervene” Roebuck wrote.

Similarly, the former England cricket captain, Michael Atherton, urged his country to consider its position before undertaking its tour to Sri Lanka. Atherton was outraged that the Sri Lankan ruling regime has carried out atrocities, chased away reporters and now blocks the United Nations attempts to establish the facts. “There seems little to differentiate President Rajapakse’s brutal regime from that of Robert Mugabe’s in Zimbabwe, about whom English consciences have been pricked”, Atherton said.

Sporting boycotts have been important in building international pressure against cruel regimes and human rights abuses before. There is no good reason that Sri Lanka should escape this pressure.

Here are some actions you and your organisation can take to make a stand for Human Rights this cricket season: