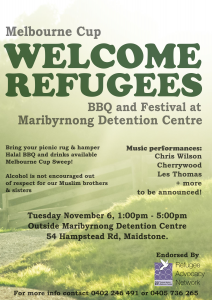 This Melbourne Cup Day join refugee rights supporters outside the Maribyrnong detention centre for an anti-racism music concert & BBQ. Let the people inside know many of us support their attempts to live in Australia by taking a Melbourne tradition to them.

Music from the legendary Chris Wilson, the Cherrywoods and Les Thomas. Plus more acts to be announced.

Plus a giant Melbourne Cup Sweep!

In between the music hear from Pamela Curr, campaigns coordinator for the Asylum Seekers Resource Centre & Adam Bandt, Greens MP.

We will also be making contact with the detainees behind the razor wire to communicate our solidarity with their struggle for freedom and human rights.

Organisations that support refugee rights are encouraged to bring an information table to the event.

This event is endorsed by the Refugee Advocacy Network