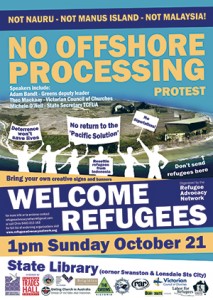 NO OFFSHORE PROCESSING – Not Nauru, Not Manus Island, Not Malaysia

The Australian government has moved to re-introduce some of the worst aspects of Howard’s ‘Pacific Solution’. The intention is for refugees to be abandoned for years on Nauru and Manus Island. Under the ‘No Advantage’ principle refugees arriving in Australia by boat will be forced to languish indefinitely in offshore camps.

Offshore processing has been marketed as a means to “save lives at sea” but refugees fleeing persecution will continue to seek safety in Australia. People have a right to seek asylum in Australia, and to arrive here by whatever means. Sending refugees to out of sight camps punishes people who have committed no crime.

Most boats with refugees leave from Indonesia. If the government is serious about saving lives at sea it should immediately arrange to resettle the 4200 people in Indonesia who are recognised as refugees by the UNHCR. As was the case under Howard’s Pacific Solution, refugees will be at risk of malaria and dengue fever, and consigned to hopelessness and despair. This policy violates human rights, is cruel and expensive. Thousands of asylum seekers face being warehoused in limbo in Australian funded off-shore detention centres.

There is substantial opposition to these policies across the community including refugee advocacy groups, religious leaders, Amnesty International, Australian Council of Social Services, Unions and many other community groups. We must protest against the re-introduction of these shameful policies and call for a new approach which honours Australia’s commitments under the UN Refugee convention. A powerful refugee rights movement under the Howard Government put an end to offshore processing and Temporary Protection Visas. We need to rebuild this movement in schools, workplaces, universities and within our communities.
Join us in protesting against the re-introduction of these shameful policies.

·        Attend with friends and associates
·        Bring signs and/or banners to help create a visually spectacular event. The Action will end with a photo opportunity on Princes Bridge.
·        Promote the Action through your networks – forward this email!