Last Friday, on the 14th of September, the Refugee Action Collective held an action outside Thai Airways’ offices in Melbourne to bring attention to the airline’s shameful role in deporting refugee Dayan Anthony back to Sri Lanka.

Following a recent ruling in the High Court, RAC is urging refugee activists to be on alert to respond to further deportations. As many as 250 refugees could be deported following the High Court case and many will leave via Maribyrnong Detention Centre in Melbourne’s West and fly via Thai Airways back to places such as Sri Lanka and Afghanistan. The government claims it is safe to send asylum seekers back there but we reject this entirely.

Thai Airways should not have any role in deporting refugees. We are urging people not to fly Thai in response, to help us make their name mud for sending refugees back to danger and for workers inside their unions, including those working for Thai Airways, to help to stop deportations. 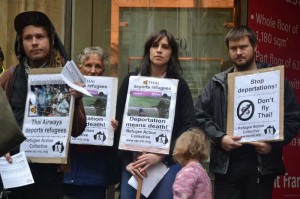 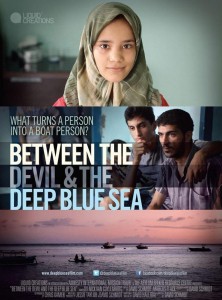 The Refugee Action Collective is proud to host a screening of Between the Devil & the Deep Blue Sea.

This powerful new documentary has won numerous awards at film festivals around the world but no major cinema has been prepared to screen this film.

But the stories and messages of this film need to get out into the public. With the the revival of the Pacific ‘Solution’ mark II and the dominance of policies seeking to punish refugees who seek asylum in Australia by boat, this film brings to life why its that refugees stuck in transit countries like Indonesia get onto leaky boats to seek protection and freedom.

By coming to this film screening, you won’t only be educated and moved, you will also be helping the Refugee Action Collective to raise some much need money. Now more than ever we need to have a fighting fund so that we can work our guts out to rebuild a refugee movement that can turn back the tide of anti-refugee policies emanating from Canberra.

We will also screen a shorter documentary about the conditions on Nauru.

Between the Devil and the Deep Blue Sea (TRAILER) from Liquid Creations on Vimeo.

On July 25, Dayan Anthony, a Tamil refugee, was deported to Sri Lanka against his will from the Maribyrnong Detention Centre. On arrival, the Sri Lankan intelligence service who interrogated him for 16 hours. He and his family now live in fear of their lives. In Sri Lanka, people are being disappeared by the government at the rate of one every five days, mostly Tamils.

A Hazara man from Afghanistan, at the moment detained in Maribyrnong, was taken from the community and is facing deportation on September 23. In Afghanistan, Hazara people are marked for death because of their ethnicity and religion by militias on all sides of that country’s conflict. In neighbouring Pakistan, Human Rights Watch report “Hazaras are being targeted as part of a broader exercise in targeting all Pakistani Shias, but it is equally true that the Hazara suffer from double jeopardy – being ethnically distinct in addition to being Shia.”

The High Court’s September 7 ruling has left about 280 Tamil and Hazara refugees in danger of immediate deportation. Many of these refugees will be deported from Maribyrnong and other high security detention camps around the country. The refugee movement in Australia needs to step up our action to stop future forced deportations to danger.

At the same time, transportation of refugees to isolated concentration camps on Nauru and Manus Island is resuming. Australia’s new bipartisan “no advantage” policy is based on deterring refugees by abusing their rights should they make it here.

Join the Refugee Action Collective Victoria to demand an end to deportations to danger and offshore processing! Let the refugees into Australia! Let them stay!