A Kurdish refugee in his mid-30s attempted suicide at approximately 6.00am at the Melbourne Immigration Transit accommodation centre. He was unsuccessful as he was stopped by his friends and SERCO guards. Fearing for his mental health, SERCO and police officers sent him to a hospital at approximately 6.30am.

This attempted suicide is the result of SERCO and immigration detention policies leaving him in limbo. He has been in detention for 14 months and was given refugee status after 7 months.

He remains detained after Serco branded him a “person of interest”. After a fight between himself and other refugees he was told that his case was pending police investigation. Yet according to his friends he has never been called into a police interview or court.

After receiving refugee status he spent 5 months in Curtin detention centre before being transferred to Melbourne Immigration Transit Accommodation. This is at least the third known attempted suicide within MITA detention centre in the last 5 months.

The incident highlights the plight of many refugees regarded as ‘persons of interest’ who are effectively indefinitely detained even though they have not been interviewed, charged or are even being investigated for possible charges. It is an absolute abuse of natural justice.

Serco and the immigration department are acting as judge, and jury and executioner in such cases.

Mandatory detention is keeping refugees in limbo, with associated mental health issues driving them to self-harm and suicide.

There needs to be immediate investigation into why the Australian Federal Police, SERCO, and the Immigration Department are keeping refugees in limbo indefinitely.

The policy of mandatory detention is inherently flawed and there is no reason why refugees such as Mr F should be indefinitely detained without charge or trial and driven to suicide.

As the federal parliament debates the best method to repel refugees, authors Robin de Crespigny and Tony Kevin remind us of the human cost of refugee policies that begin with deterrence. Their stories of why refugees breach borders and avoidable boat tragedies speak of their belief in the need for safe passage for refugees, not criminalisation and deterrence. Join us for a conversation with Robin de Crespigny, author of The People Smuggler: the true story of Ali Al Jenabi, the ‘Oskar Schindler’ of Asia and Tony Kevin, author of Reluctant Rescuers and A Certain Maritime Incident.

Both books will be available for sale on the night, as a fundraiser for RAC

The People Smuggler is the larger than life tale of an Iraqi refugee who becomes a people smuggler in order to save his family. It is a moving story that pierces many of the myths, half truths and outright lies that underlie government policy on refugees in Australia today. 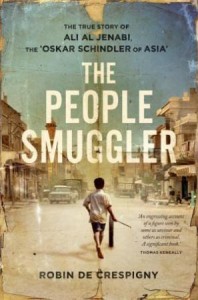 It tells the true story of Ali Al Jenabi, who flees Saddam Hussein’s Iraq after being tortured in Abu Ghraib prison. While tenacious and resourceful, he is tossed by waves of misfortune from one place to the next, and becomes a ‘people smuggler’ after finding himself stranded in Indonesia. He sees it as a way to gather the money required to bring his family to Australia, and simultaneously help Iraqi refugees to freedom. He became the first person ever to be tried under Australia’s new anti-people smuggling laws – or a ‘political football’ as his lawyer describes him.

Ali is immediately likeable, rebellious, a fighter, honest, loyal, determined and generous. Author Robyn De Crespigny spent “more than three years working intensely with Ali” to bring his epic journey to life. She says that “I made the decision to write this book in the first person to enable the reader to experience Ali’s life at first hand by being placed in his shoes.”

After the US defeated Saddam Hussein in the 1990-91 Gulf War, they encouraged Shiite Muslims in the country’s south to rise up against the regime, and then abandoned them. Ali, a Shiite, was caught up in the brutal aftermath of the failed rebellion. Captured and taken to Abu Ghraib, he was tortured by Saddam’s henchmen, along with his brother, who had two fingers chopped off while Ali watched. As a result Ali begins working for the resistance against Saddam, eventually forcing him to become a refugee.

Never knowing whom he can trust or where to turn, Ali uses the services of people smugglers, some bad, some good. When presented with an opportunity to work for a people smuggler, he sees a way out of his situation. At this time ‘people smuggling’ in Indonesia was not illegal, and considered just another business. Ali tells himself, “So I will do it myself the way it should be done. I will not only help my family, I will save other Iraqis and everyone I help escape will feel like a personal victory over Saddam.” He comes to feel that his efforts at people smuggling do more good for the Iraqis who had fought Saddam, than he had done as part of the fragmented and faltering resistance.

It is a tribute to the quality of the writing that the book raises political questions about refugees without breaking the stride of the very personal story it tells.

For example, writing as Ali, De Crespingy recounts “Julia Gillard and Chris Bowen coin the phrase: the people smugglers’ business model. They declare they are going to smash this mysterious identity by any means. I laugh out loud when I hear it. Do they think there are men in suits sitting around boardroom tables somewhere devising strategies? Has no one told them people smuggling is an amorphous rag-tag network run by word of mouth and mobile phones? There are no records or bank accounts. No spreadsheets or business plans. They pop up wherever people are trying to escape and disappear when they are no longer needed. If you want to stop people smugglers you have to do something about what causes people to flee their own countries in the first place.”

Ali is arrested in Thailand as part of an Australian Federal Police (AFP) trap. He spends a year in a Thai jail, before being extradited to Australia, to face trial for ‘people smuggling’ – for events that all took place in Indonesia, and which were not criminal offences there. The actions of the AFP expose Australia’s role as a regional bully.

The AFP Iraqi informer who helped set the trap, appropriately identified only as ‘Weasel,’ was also involved with ‘people smuggling.’ But he is paid perhaps $200 – $300 US dollars a week by the AFP, and eventually given permanent residency, in return for his cooperation. He was also involved in the organisation of the journey of the SIEV X boat, which sank killing 353 people. Which raises further questions about what Australian authorities knew about that disaster as it unfolded.

The court case does not go as the AFP and their political masters would want, as details of Ali’s motivation and kindness come out. No-one died on Ali’s boats, they were not overcrowded, and he let people go for free when they couldn’t pay. As one of the refugees Ali helped later said “I think he is a very very gentleman. He is the best smuggler. He had a good heart. He was not a hard greedy person.”

Although the judge is forced to jail Ali, he remarks “Oskar Schindler saved many lives by employing Jews as slave labourers and he made a great deal of money out of their labour, although he did later repay many of those that he was able to save. But the point is a valid one; there can be mixed motives and I accept the prisoner was not solely motivated by money, but was largely motivated by the need to get his family to Australia come what may.”

Because Ali has been a political football the Immigration Department takes over a year to decide on his asylum claim, against all their own regulations. Ali is found to be a refugee, but on then Immigration Minister Chris Evans’ decision is put on a ‘removal pending bridging visa’ – meaning he can be deported from Australia at any time if the situation in Iraq improves. This is similar to the notorious Temporary Protection Visas of the Howard years. Ali remains in this situation today.

After getting out of Villawood detention centre Ali is shunted between Centrelink and the Immigration Department. He has parole officers come and do random breath tests at his house (Ali a Muslim, is a non drinker).

Ali says “The rosy glow of liberty begins to dim and I realise I am back on the treadmill of endurance. The reality is the minister is going to leave me on this removal visa and any day I could get a knock on the door and be flown out. Until I get a permanent visa I am told I definitely can’t apply to bring Intisar here as my wife, and if I leave the country to visit Indonesia I will not be allowed back in. I call Nagis [his daughter in Indonesia] and try to expain to her, but what does a six year old understand? She waits each day for me to appear.”

Ali’s story should be compulsory reading for current Labor Immigration Minister Chris Bowen, who to this day refuses to give Ali a permanent visa. The book deserves to be widely read. Not only is it an incredibly moving story, it will help anyone that reads it to take on the lies about ‘people smugglers’ and refugees that the Australian government relies on to justify its heartless policies.