The Refugee Action Collective condemns the Gillard Labor government’s support for the bill moved by Rob Oakeshott that passed through the lower house tonight, Wednesday, the 27th of June. RAC condemns the opportunism of both sides of parliament, seeking to gain politically out of two boat disasters in the last week. Offshore processing does not protect lives, but seeks to deter asylum seekers from fleeing to save them.

Gillard hopes to deter refugees from getting on boats by dumping boat arrivals in Malaysia, a country that has not signed the UN Refugee Convention. Her policy ‘compromise’ is to embrace two notorious anti-refugee positions from the Howard-era – the reopening the Nauru detention centre and to consider introducing Temporary Protection Visas. This attempt to circumvent the High Court decision, which struck down the Malaysia deal last year, is nothing but the absolute trashing of Australia’s international obligations to give refugees protection.

The Refugee Action Collective also strongly opposes the Coalition’s amendment. It is a truly appalling spectacle to see the Liberals posing as humanitarians when their policy is to turn back asylum seeker boats, reopen Nauru detention centre, re-introduce Temporary Protection visas that created so much misery for refugees and refuse to process asylum seekers without documents.

Neither ‘solution’ proferred by Labor or Liberal is based on a concern to save refugee lives. Politicians from both sides have cried crocodile tears for the lives lost at sea. Only the Greens have taken a principled stand in parliament by opposing the unseemly debate.

If the government were genuinely concerned about saving refugee lives they would immediately lift the appallingly low numbers of refugees they resettle from Indonesia. Australia has only resettled 57 UNHCR refugees between January and May this year. Australia doesn’t even fulfill its stated humanitarian quota. Waiting in the so-called ‘queue’ in Indonesia consigns most refugees to living for the rest of their lives in limbo where they are unable to legally work and in many cases their children are unable to access education. They live in constant fear of being detained in Australian-funded detention centres in squalid conditions or being deported back to the countries from where they have fled.

What’s more, many refugee groups, particularly Hazaras, Rohingyans and Fali Kurds, rarely receive the resettlement places. This is what forces asylum seekers to risk their lives by searching out people smugglers to help them reach Australia. There is no other way to secure their freedom and a future worth living.

The lack of concern for the lives of asylum seekers was on display by the Australian authorities response to the boat disaster. The Australian government was notified that the boat was in distress on Tuesday evening but it wasn’t until Thursday when the boat capsized and hundreds were drowning that the Australian authorities responded. If it had been Western tourists on a cruise liner, no doubt their lives would have been deemed important enough to begin immediate rescue.

And even though the boat was in international waters, the Australian coastguard ordered the boat in distress to turn back to Indonesia. Then they insisted that the Indonesian search and rescue, Basarnas, take responsibility in leading the rescue effort. This is despite the fact that Basarnas was woefully under-resourced to deal with the situation, with only one fibreglass vessel based in Jakarta and no rescue boats located in South Java. It has been further revealed that the Australian authorities were in phone contact with the boat but neglected to pass on the phone number to the Indonesians.

The laws that criminalise people-smuggling only make the trip to Australia more dangerous. It drives the whole operation underground and makes asylum seekers fearful of putting out distress signals. The scuttling (destroying) of the boats by Australian authorities only guarantees that unseaworthy boats are more likely to be used.

A truly humanitarian response would therefore involve decriminalising the act of bringing refugee boats to Australia. It would also involve making the boat passage to Australia safer. The Australian authorities could help ferry refugees from Indonesia or Malaysia to Australia.

This is a crucial time for refugee rights supporters to speak out loudly and clearly against this race to the bottom on refugee policy. Now is the time for all supporters of human rights to reiterate their opposition to all forms of offshore processing.

The possible loss of lives of nearly 100 asylum seekers feared drowned at sea between Australia and Indonesia was entirely preventable. The Refugee Action Collective places the blame for these lives lost with the Australian government and demands people smuggling is decriminalised to prevent any further loss of life.

“Refugees are some of the world’s most vulnerable people. They need our help, not the various stages of torture we put them through to try and stop them from seeking asylum. We should help them arrive here by boat. We should make it safer,” said Benjamin Solah, spokesperson for the Refugee Action Collective (Victoria).

This particular boat and those on it could have been saved days before. Many media reports account for Australian authorities knowing that the boat was in distress well before the boat capsized. Australia’s border security regime should answer for why they watched on as the tragedy unfolded. The Australian Navy should be used to rescue asylum seekers not deter them from entering Australian waters and exercising their basic right to seek asylum.

RAC Victoria also reiterates its demand that people smuggling be decriminalised. The criminalisation of people smuggling, the scuttling (destroying) of boats on arrival and the regime of border protection make the journeys more unsafe than they need to be. We demand the five year mandatory sentences for people smuggling should be scrapped. We also demand that Australia accept more refugees that languish in detention centres in Indonesia and actually meet its quota.

“Whilst both Gillard and Abbott pledge not to play politics after tragedies like these, it is just a cover for the fact that it is policies like ‘Stop the boats’ and ‘turn the boats back’ that will mean more refugees will drown at sea.”

Sunday’s rally saw over a thousand refugee activists and supporters rally outside the State Parliament on World Refugee, as part of nation-wide protests on the 20th anniversary of mandatory detention, a policy introduced in 1992. It was a lively rally that the Refugee Action Collective were part of building with the Refugee Advocacy Network. The rally called for an end to mandatory detention and also raised the plight of Ranjini, a pregnant mother of two who faces indefinite detention due to unaccountable and unjust negative ASIO security assessments.

Check out the video footage and photos from the day below. 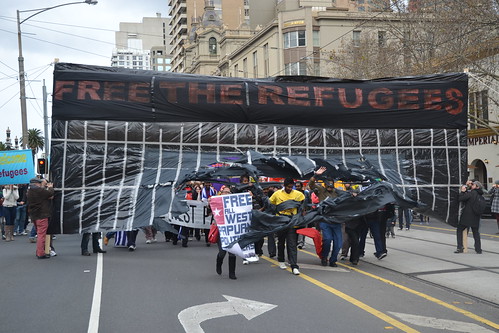 Our next event is on July 11, which is a public forum, ‘ASIO Assessments, Leaving Refugees in Limbo’ with Julian Burnside, Niromi de Soyza, author of ‘Tamil Tigress’ and Declan Murphy from the Refugee Action Collective. More details to be announced soon and the speakers are subject to change, but you can RSVP on Facebook to keep in touch.