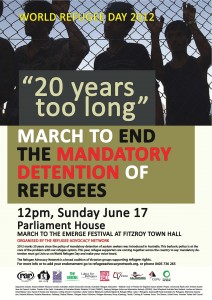 This year is the 20th anniversary of the introduction of mandatory detention for all asylum seekers who arrive in Australia by boat.

The Refugee Advocacy Network is calling on all groups and individuals who support refugee rights to come together and rally for World Refugee Day, and send a clear message to the government that it’s time to end mandatory detention.

Increasing numbers have been incarcerated for long periods of time – months and even years.

In Darwin, on average, five asylum seekers are being brought to the emergency department each day – a horrifying statistic.

Asylum seekers and refugees in the camps are becoming increasingly despairing and desperate. Something needs to change.

The core of the problem is mandatory detention – an inhumane policy that victimises people who have committed no crime, and simply want a better life for themselves and their families.

Recently, the immigration department has begun releasing around 500 asylum seekers each month on bridging visas. While this system isn’t perfect, it is welcome that some asylum seekers are being released from detention.

It proves that it is possible to do what the refugee movement has been campaigning for – to support asylum seekers in the community while their claims for refugee status are being assessed.

The Refugee Advocacy Network calls on the Australian Government to protect the rights of asylum seekers.

The last two years’ World Refugee Day Rallies in Melbourne have been supported by more than 50 groups each year. We hope to have even more groups represented this year.

Send your group’s endorsement of World Refugee Day 2012 in Melbourne to: refugeeadvocacynetwork (at) gmail (dot) com or ring Sue on 0413 377 978 or Liz W on 0405 736 265.
Plan for your group to be represented to ensure that this rally demonstrates the breath of community support for refugee rights.