Seeking asylum by boat is not a crime. However, those who assist asylum seekers to reach Australia’s shores via informal travel arrangements have been systematically demonised by both Labor and Liberal parties. This is backed up by mandatory sentencing laws for anyone found to have participated in people smuggling. Hundreds of poor Indonesian fishers, including dozens of minors, have been jailed for the mandatory 3 years in Australia. The criminalisation of people smuggling, combined with the militarisation of Australia’s borders and the impounding and destruction of boats intercepted, is what makes the boat journey to Australia so needlessly dangerous.

This important Refugee Action Collective forum comes at a time when there is growing concern over the treatment of people smugglers. Ten judges have now expressed their concerns out over mandatory sentencing and a bill introduced by The Greens to end mandatory sentencing of Indonesian crew has been referred to a Senate committee and will likely come back to Parliament in late March.

This Easter, on the year of the 20th anniversary since the introduction of mandatory detention and the preceding two decades of demonising asylum seekers, refugee activists will converge on detention centres around the country to say ’20 years too long!’ and demand that all refugees be freed. 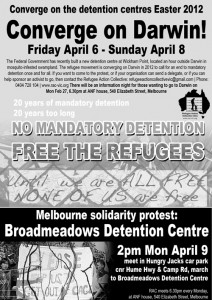 Why Darwin?
Darwin is rapidly becoming Australia’s detention capital. There are now three detention centres in Darwin with up to 1000 asylum seekers. When the newly opened centre at Wickham Point is complete it will have capacity for 1500 people alone. Chronic levels of self-harm and protest have put the Northern Immigration Detention Centre (NIDC) in a state of perpetual crisis. The convergence this Easter, centred on Darwin, with simultaneous protests at other detention centres around the country like Villawood in Sydney, can again focus attention on the reality behind the wire.

With over 4,500 refugees in detention including over 500 children, Bowen’s promises look more false than ever. As well as the unrealised promise to release all children by June last year, Broadmeadows Detention Centre was supposed to be converted to a low-security hostel facility for families but instead, the start of 2012 has seen the detention centre right in Melbourne’s suburbs reach new levels of despair. Refugees have been on hunger strike, have sewn their lips, attempted suicide and many refugees recognised as such have not been given visas due to the long and unjustifiable wait for ASIO security checks. Worse still, some refugees will languish in indefinite limbo due to unaccountable and unappealable negative security checks. The one glimmer of hope, bridging visas, has fallen far short of the promised 100 detainees released a month.

This detention centre needs to be shut down and the refugees inside need to be released into the community.

As tensions once again rise at MITA (Melbourne Immigration Transit Accommodation) in Broadmeadows, an Iranian man, aged 28, stitched his lips up this morning (Monday) as a sign of desperation. He has been detained for 11 months.

His friend told Serco and medical staff that he was concerned about his friend and warned them. Serco responded after the incident which was too late. Now they are checking up on him every 30mins. This news comes as updated department figures are released showing 4783 including 528 children are still detained.

“We are concerned that this man is not drinking water. It is absolutely appalling that we are locking innocent people up to the point that they would do this to themselves. Our refugee policy is rotten to the core and must be dismantled immediately. Anything short of that is just inhumane,” Daniella Olea, Refugee Action Collective member and regular visitor.

The lip-stiching follows a hunger strike, of up to six detainees, a few weeks ago where one man was found lying by a fence refusing to move.