The Refugee Action Collective opposes the proposed changes to the Migration Act by the Labor government and any amendments proposed by the Liberal opposition. It believes all amendments seek to strip any safeguards for human rights and defies international law.

The changes proposed by Prime Minster Julia Gillard and Immigration Minister Chris Bowen make Australia’s refugee policy the worst in Australian history, seeking to dump asylum seekers, including children, in Malaysia, a country that has not signed the UN Refugee convention and has a history of gross human rights abuses toward refugees. The changes undermine the Refugee Convention that Australia has signed and must uphold, and are in breach ALP’s own National Party Platform, which calls for onshore processing.

Both sets of amendments proposed deny the fundamental right to seek asylum in Australia and not be penalised for the method of arrival.

It is shameful that Gillard has given Abbott and the Liberals the space to criticise the amendments on the basis that they don’t guarantee human rights, whilst he still supports offshore processing, temporary protection visas and mandatory detention. The Refugee Action Collective oppose all forms of offshore processing, including Nauru.

The government is pushing ahead despite public opinion shifting in favour of onshore processing with two recent Age/Nielson polls showing the majority of Australians are opposed to any form of offshore processing. The Refugee Action Collective believes that onshore processing should be in the community and that there needs to be an end to mandatory detention.

The Refugee Action Collective will be increasing public protests in response to the amendments. It plans to protest outside of the Park Hyatt on the 28th of September when Julia Gillard is scheduled to speak. This follows Chris Bowen having a press conference interrupted by refugee activists in Sydney where he was chased down the street. Melbourne refugee activists vow to continue the public pressure on the Labor government.

The Refugee Action Collective (Victoria) is a grassroots collective dedicated to fighting for refugee rights in Australia and campaigning against mandatory detention. For more information visit www.rac-vic.org

The Refugee Action Collective condemns Labor’s plan to try and change the Migration Act to make the Malaysian “solution” lawful in the wake of the High Court victory.

We reiterate our demand to end all offshore processing. Asylum seekers should be processed on the mainland, in the community.

It is a basic human right to seek asylum and the UN Refugee Convention states that someone seeking asylum should not be penalised for the method in which they arrive. Asylum seekers have the right to arrive here by boat. We reject the fear mongering and singling out of boat arrivals.

In the wake of the High Court decision, Gillard had a chance to bin offshore processing for good, but has chosen to follow Abbott even further to the right.

Labor have sunk to a new low, ignoring all opposition in order to push through with this barbaric policy.

The Refugee Action Collective calls on those ALP members who voted against Labor policy in caucus to cross the floor and vote against any legislation that legalises offshore processing.

Julia Gillard is scheduled to speak at an Asialink and the Asia Society luncheon at the Park Hyatt Hotel at 12.00pm on September 28. The Refugee Action Collective will be protesting outside.

Also, on November 5, the Refugee Action Collective will be holding a rally calling for an end to mandatory detention and offshore processing marching from the State Library at 12pm.

The Refugee Action Collective will also be part of a national convergence to Sydney to protest outside the ALP National Conference in December. We expect there will be renewed interest for the protest in response to the latest announcement from the Labor caucus.

For more information, contact Benjamin Solah on 0402 766 009 or racvicmedia@gmail.com

The Refugee Action Collective (Victoria) is a grassroots democratic collective that organises activism in support of refugees, against the government’s refugee policy and calls for an end to mandatory detention.

(Meet in the courtyard on the south-east corner) 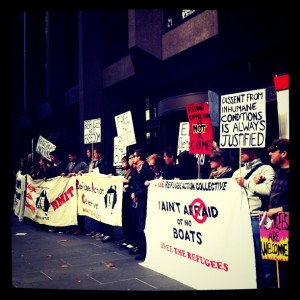 Serco is the corporation that makes millions of dollars from locking up asylum seekers under the Australian government’s inhumane policy of mandatory detention. In order to fulfil the government’s aim of dehumanising and punishing these innocent people for the so-called ‘crime’ of seeking asylum and to cut costs, Serco regularly abuse asylum seekers, beyond the abuse of locking these people up indefinitely.

On Friday, the 16th of September from 12.30pm, RAC Victoria wants you to join us in protesting against this corporation and making a fuss in the CBD of Melbourne for a few hours to highlight the abhorrent treatment Serco metes out to innocent refugees. We want to make sure people know there are those in Australia that won’t stand for this.

Serco guards have been reported to dare suicidal refugees on rooves or up trees to ‘jump,’ the company have not just ignored the mental health needs of refugees who are driven to suicide (7 since Serco took over administration), but psychologically abused refugees by putting defiant detainees in isolation, used sleep deprivation techniques against refugees protesting on rooves, and simulated deportations leading one Hazara man to commit suicide a week later.

And as recently as last month, guards beat an Indian man to try and force him on a plane to be deported, in line with the powers given to them to carry out deportations, that would have been used in conjunction with the Australian Federal Police to deport people to Malaysia under the now defunct plan.

No human being should be treated like this, let alone people who have already gone through so much trauma that led them to flee in the first place. We need condemn Serco for their disgusting treatment of refugees and demand that we get rid of mandatory detention and offshore processing so that asylum seekers are processed in Australia, in the community.

Also check out the Facebook event to invite and promote the rally!

For media enquiries contact Benjamin Solah on 0402 766 009 or racvicmedia@gmail.com