Sept. 28 – Action against Gillard: No Malaysian “solution!” No offshore processing!

This is the new action after Gillard rescheduled her speech from July. 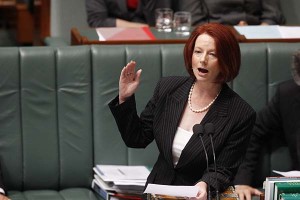 Julia Gillard’s plan to ship asylum seekers to Malaysia as part of the so-called Malaysian “solution” is a direct attack on the right to seek asylum by any means necessary as guaranteed by international law. It is a further return to the dark days of John Howard and the pacific “solution.”

Speaking at the Park Hyatt on the 28th of September, the Refugee Action Collective want to make sure Gillard can’t show her face in public in Melbourne without vocal and angry opposition to her attacks on the basic human rights of asylum seekers and refugees. Come to the Park Hyatt and voice your outrage.

We need to demand that it isn’t a crime to seek asylum by boat, that the refugees should be let into Australia, processed on our shores, and in the community, not in barbaric detention centres. The conditions in Malaysia for refugees are inhumane, and they can be subject to caning. This is where refugees will be forced to rot in a so-called queue that barely gets shorter because Australia’s intake of refugees is so low. We also oppose any other offshore “solution” such as Nauru.

It is clear that there are many people in Melbourne and around Australia that are shocked at the way our government treats refugees and the conditions in the camps in Malaysia. Now is the chance to do something about it, voice that sentiment, by protesting outside the hotel and making sure we’re not silent whilst Gillard commits these crimes against human beings.