Dec 4 – Melbourne refugee activists: get to Sydney to protest at ALP conference

Protest for refugee rights at the ALP conference in Sydney
Sunday December 4, 2011 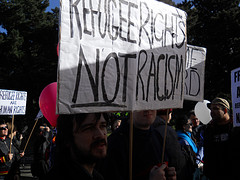 The Victorian Refugee Action Collective has escalated its campaign this year, protesting in the streets of Melbourne, at SERCO offices, and outside the detention centres in Broadmeadows and Maribyrnong. Now we are asking refugee supporters to step it up a notch and join us and other activists from around the country in a protest outside the ALP National Conference in Sydney this December, where a rally has been called by Sydney RAC.

Why protest at the ALP conference?
It’s obvious really. Labor has been in government for 4 years, and the situation for refugees has only gotten worse. Over 6,000 asylum seekers languish in an ever expanding network of detention centres across the country. Hundreds of children remain in detention in spite of repeated promises they will be let out. And now the “Malaysian solution” threatens to plunge Australia’s treatment of refugees to new depths – deporting refugees to one of the few countries in the world that treats asylum seekers worse than those in Australia.

We need to send a strong message to the Labor government that there is a growing movement of people willing to stand up to their inhuman refugee policy, just as we stood up to John Howard.

The 2011 ALP conference is shaping up to have more controversy and debate than many in recent years. We need to make sure that the refugee issue is part of that debate. Masses of people from across the country protesting outside the conference can not only send a direct message to Gillard, it can also encourage conference delegates to take a stronger stand on the issue.

Get organised to get to Sydney
Cheap flights to Sydney are available now with JetStar (around $70 return), so get in early and book a flight!

The refugee protest will be taking place at lunchtime on Sunday December 4. More details TBC.

Planning for the event is still in its early stages – we are hoping a wide range of organisations and individuals from around Victoria and Australia will participate.

If you are interested in helping to plan for this protest, come along to one of our meetings (details in the siebar) or get in touch via our refugeeactioncollectivevic@gmail.com.